Now more than either we need to support Black Owned Brands and do so with our wallets. From here on out we need to always have these brands front of mind. 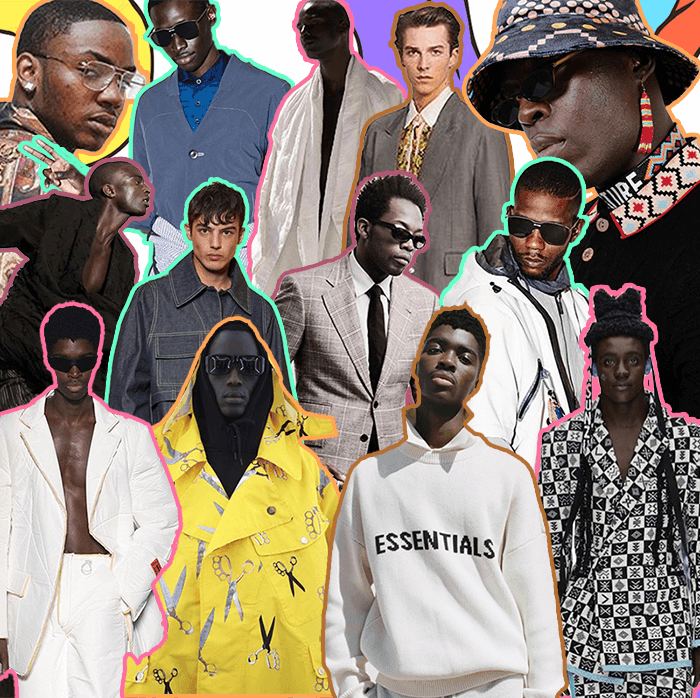 In the middle of Covid-19, Black Lives Matter protest and just general unrest in the world. Now more than either we need to support each over. And there is no better way to do so then with your wallets, now more than either we need to support Black Owned Brands. We need to always have these brands front of mind and recognise them for there talent, from here on out. We have collected a list to fill out your whole wardrobe so you have no excess to be in support of these leading fashion brands.

Asauvage  was born from the mind of Adrien Sauvage and formed in LA. His approach rooted in slim fit suiting has a firm hold to bold yet definitive graphic use. This approach offers a more open side to the often the traditional realm of formal suiting. His print and colour forming is brilliant. A Black Owned Brand that is is need in the formal Waredrobe.

Focusing on the art of colour selection and well-structured tailoring  Wareaire does an excellent job at defining colour in formal wear and finding a relaxed middle ground between street and suiting needed in the world of custom suiting. Their suits are elegant, distinct and hold their own in both formal and informal settings. Wareaire has the customer in mind when designing, focusing on the beauty in clothing while ensuring comfort is front of mind.

A slow fashion label, based in London is a delivering relaxed deconstructed aesthetic that blends traditional tailoring styles with unstructured and rough fabrication. Thus creating a new space for the structure mans wardrobe.

High impact graphics combined with position tailoring is the fundamental foundation of Ikire Jones. Reflective of the two founders Walé Oyéjidé and tailor Sam Hubler. Ikire Jones plays with the formal menswear wardrobe but positions its aesthetic left of centre and in the realms of explorative creation. Their creative approach focuses on the storytelling of Marginalised communities, reflecting their message in a position of power and asking its community to questions it's ideals. Stunningly tailored pieces is what I think of when I hear Ikire Jones.

Travel is fresh off the Instagram feed brand. Led by Patrice.K and formed in Marrakesh. Stunning prints and beautiful raw fabrics blended for a fresh take on every day attire.

A Cold Wall has become the darling of menswear in recent years. A London-based brand led by Samuel Ross, a protégé of Virgil Abloh. Formed in 2015, Ross blends tailored edge with a graphic designer’s eye and applying it to streetwear. The man can do visionary things with knitwear.

Kassim Lassissi created  Alledjo  in 2017, forming the unisex label produced in West Africa. (Cotonou, Benin, & Dakar, Senegal). Each collection dedicated to its destination and its culture, leading to a diverse offering every year. Their print skills are next to none and they are not afraid to play with the normal standards of the menswear silhouettes.

Martine Rose started her iconic label 200, hailing from London. The brand has maintained it's underground cult vibe while growing to international success. Rose’s Jamaican-British heritage clearly influences her collections as she handpicks cultural elements from multiple eras to arrive at designs that transition between set trends, claiming a space for her own.

A New York Native, Public School has been a leader in menswear in the NYC scene. Established in 2008, PS has grown to be a staple for the hype beast and contemporary fashion wearer. Moving between formal and streetwear with ease while maintaining their bold, structure and utilised aesthetic. A must-have for deep inner-city peeps.

Pyermoss is everything I want in a Modern contemporary brand. Playing with wearable silhouettes, while formal imprinting their design DNA into every garment that leaves their house. Pyermoss is made for the unique streetwear guy, wearable yet definitive in its approach. Taking elements from past street styling then bringing that legacy into the now. WE LOVE THIS THEM, YOU SHOULD TO.

Wales Bonner excels at elevating the everyday fashion piece. Grace Wales Bonner launched her label in 2014 and has since climbed to every success in the fashion space. WALES BONNER comes to crafting design at a multiplicity of perspectives that allows the label to evolve beyond the more traditional ideas of luxury wear and re-imagines it for the next generation.

Art Comes First is a new take on the traditional sartorialist style, plucking elements of streetwear and applying them to the vestiary wardrobe with a progressive lens. After Forming in London by founders Sam Lambert and Shaka Maidoh, they have all the makings of the unapologetic punk movement formed in modern fashion.

Bricks and Wood is proud of its black-owned label and it wears it's pride well. After forming in South Central, Los Angeles in 2014, The brand has become known for its 'Rare Appeal' approach to apparel design. They have depicted their craft to telling stories and moments in time through their clothing pieces, transforming luxury every day wear into memorable moments that connect with each individaul wearer.

Daily Paper Clothing is a full wardrobe offering hailing from Amsterdam showcasing both men's and women's ready to wear garments and accessories. The label pulls inspiration from the African heritage of its founders, adapting inspiration to the modern wardrobe. A strong scene of blending relaxed street styles with high impact graphic.

The label launch in 2016 by the designer of the same name, Heron Preston is a designer at the forefront of human impact fashion and sustainability. The multi discipline artist built his talent at Preston’s and working for Nike and Kanye West. His collections are a reflection of the society they formed in and he is not afraid to make a statement through design. Notable for redefining workwear and instilling a utilitarianism approach to his range.

Braking the model for knitwear is Maxhosa by Laduma Game. Founded in 2012 by Laduma Ngxokolo, this South African based label is redefining how the modern man views knitwear. They don't shy away from colour and patterns and this is due to Ngxokolo creating a knitwear space for his home Amakrwala, now we all have the pleasure of enjoying his vision around the world.

Norwegian Rain throws back to the simplicity found in traditional Japanese fashion design. Focusing on the simplicity of design while highlighting functionality. This outerwear brand has held strong to these ideals, they are 'hardcore' functional and hasn’t compromised on stylistic decisions. The tech of the fabrication hidden, utilised but isn’t the focal point. The style choice is the main show.

Fear of God has been built on Jerry Lorenzo’s sensibility to combine creative intuition with the practical need to create fashion items that are lacking in the market. Garments that need refining or evolve for the community he lives in. His designs and business have always been his way, and while Fear of God never set out to be the global scale brand it has become, Lorenzo has ensured he has a firm grip on the wheel. Coming from a sports upbringing, he was the son of an MLB player and followed in the sports industry footsteps in his early career. These ideas between sports and streetwear have strongly influenced Lorenzo’s design direction. The brand has become known for elevating casual style to the height of luxury and wearability.

Urban Zulu nails contemporary print design, amid their full format women and menswear collections, they utilise print design like few others can. Bold, vibrant and highly texturized it leaves you wanting to buy their whole collection. The brilliance with the Urban Zulu approach is how they cut through their heavy print DNA with solid garment structure. Their pieces are loud but wearable in the same vein.

DIOP was formed by Mapate Diop and Evan, formed from Diop's native Nigeria roots and his youth experience as a first-generation American. Focusing on Ankara imported fabrics and designing silhouettes that reflected Diop's heritage, the label was created as a need to deliver clothing that was not readily available to his community. Funnily for us, we all now have the privilege of experiencing DIOP garments and joining an inclusive community that celebrates minimal  fashion creation.

Dyne has become New York's performance attire leader, catering to men who embody the fast past of city dwelling. Dyne focuses on form, function and fabrics, reflected in their experimental fabric selection and structured approach to garment construction. They walk a fine line between formal and activewear, often blending elements from both camps to encompass the lifestyle of the man in motion. They have cut a space between the two worlds that suits them very well, allowing for their camp to thrive in an 'always ready and always styled' mentality.

Darryl Brown brings a minimal luxury feel to the industrial uniform. The influence of the trade uniform is heavily seen in his collections, the idea of reimagining the blue-collar uniform in luxury vibes is an interesting take on ready to wear. The founder is Kanye West affiliate, being a past stylist for the raper, and the ideas of redesigning workwear is noticeable. Most ranges feature a selection of strong styles paired soft natural colourways.

Casual or what? fundamental. Paskho formed from a needed return to fundamental garments. Their pieces are for everyday wear. Their garments formed in sustainable practice and comfort while ensuring you have some wanderlust in the styling and design.

Formed and based in London Bianca Saunders launched her Eponymous label in 2017. Ever since she has been pushing the ideals and structure of menswear, searching for a new meaning of the menswear form. Staying true to her menswear knowledge she explores these boundaries with in the frame of wearable styles. Each collection is experimental and wearable, a hard balance to hit.

Carton offers a unique approach to outerwear, focusing on unity and functionality in their designs. They form simplistic designs with a direct message at its heart. Challenging the norms of the world around them and focusing on how imagery can create conversation. They are genderless and inclusive.

Post Imperial is a shirt brand that captures colour and pattern from a Nigeria lens. Fabrics treated in Nigeria through a process called Adire.- a rare hand dyeing process developed by the Yorubas in the Southwest region of Nigeria. The result is beautiful and intricate designs with a modern perspective. Their styling exudes optimism and punches a lot of colour and energy.