We ponder on some hard hit thoughts so you don't have to. We exploring how Tiger King became a world wide hit. 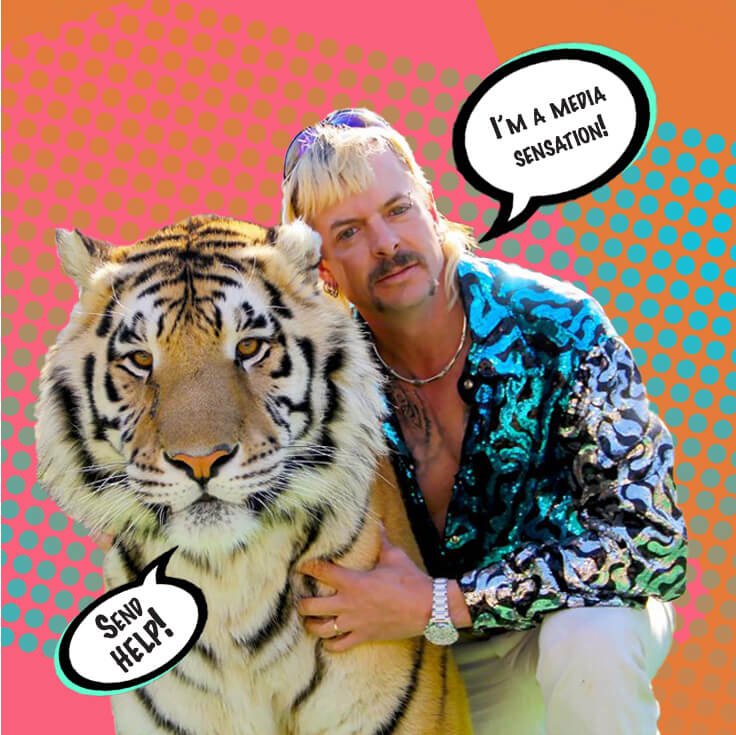 There is a guilty pleasure I did to admit. I love watching trashy reality TV shows, purely to make myself feel good about my life choices. There is something about watching the shaky realities of people’s lives that lets me relax about my own shortcomings. I'm not judging, it's more a case of complete shock as people flip their lives upside down for a slither of fame and notoriety. One of my personal favorites is Doomsday Preppers, the preppers belief in fear is so far removed from reality it makes me feel some level of normal.

That is the reason reality television is so popular, we all know it’s manufactured entertainment, but the experience is just close enough to reality that we feel a part of the narrative. Even if it is for 30 minutes of the day, we can escape into someone else’s existence. The dramatization of real life is the magic sauce we love to consume.

Knowing there is an element of truth behind the absurdity allows for a connection to the story that fiction can’t simulate. Fictional stories can be far flung in believability but we know there is a lack of truth. However, when a story manages to combine fictional level drama and in real-life reality, it creates entertainment gold.

Netflix's, Tiger King: Murder, Mayhem and Madness has achieved this combination. The pinnacle of unbelievable storylines captured in real life. The twists and turns of the main subject’s life, Joe Exotic, seems so far from believable, the reality of the documentation is truly shocking. Even with the dramatic effect removed, viewers are still left with jaw dropping complexity that unravels in this documentary.

Originally, designed to highlight the issue of captive tiger breeding in America, the docudrama follows the life and fall of one of the most prevalent characters at the centre of the big cat entertainment industry. A self-proclaimed redneck, gay, meth smoking, mullet enthusiast and tiger overlord, Joe Exotic.

While the series is based on exploring the complex world of captive big cat breeding and whether it is justifiable cruelty to save an endangered species. Director Eric Goode quickly veers off any discussion about big cat conservation into the life of the Tiger King character, who more or less uses his 'big cat persona as a vehicle to fame and fortune.

Loosely speaking, each episode documents the ongoing rival between Joe and his enemy Carole Baskin, a type of big cat oracle (in her eyes) in America, who’s sole life's work is to save every big cat in America from a captive existence and to bring them a peaceful life at her 'sanctuary'. Yeah, the ends don't justify the means. Realistically she is dragging big cats to a similar fate that Joe Exotic provided. Not to mention that she was clearly shown breeding and selling big cats in the past, an act she chastises Joe for.

The rivalry blossoms as Carole and her band of 'cool cats and kittens' attempt to close down Joe's roadside zoo (The Greater Wynnewood Exotic Animal Park), under claims that establishments of this calibre are only breeding big cats for capital gain. The cubs are used as draw cards for cub patting experiences to bring in the paying visitors. Carole throws down a lot of power with her seamlessly endless bank account, acquired from her late husband, Don Lewis, who she most likely killed and fed to the tigers, as the rumours of the big cat community would lead you to believe. Just one of many side stories of this tale that could easily be explored in its own mini series.

Unsurprisingly Joe is not the greatest businessman and quickly runs into financial trouble with the ins and outs of the Zoo business, as he tries to feed his growing cohort of mutant tigers. When all hope seems to be lost he is bailed out by a fellow big cat lover, gambling tycoon type Jeff Lowe, who swings into the park fresh from Vegas. Jeff’s past is not explained in detail in the series, but with a little internet detective work you can find claims he was convicted on counts of mail fraud in the early 2000s. Safe to say, he isn’t the best partner for a struggling business owner who has mental health issues.

Joe is quickly swept up by Jeff’s saving grace and focuses all his energy into media fame with his outlandish behavior. Including, but not limited to, blowing up everyday appliances, shooting objects at random, writing songs about how Carole fed her husband to the tigers, plugging his travelling zoo show, seducing young confused straight men into marriage, abusing employees and rambling on about completely false conservation information to justify his exotic animal treatment. The man clearly has mental health issues!

The undoing of all his meteoric success was his hatred for Carole Baskin, openly discussing plots to kill her and finally being trapped in a web of lies, through a not so elaborate plan to hire a hit man to finally do the deed. The claim involved the FBI and interstate investigations, concluding in a lot of backstabbing from Jeff Lowe, his supposed business partner, and the hired hit man, Allen Glover, who effectively threw Joe under the bus by putting the blame solely on him.

Along with counts of animal cruelty, including the slaughter of several large cats, Joseph Allen Maldonado-Passage was convicted on April 2019 of 17 charges of animal abuse and two counts of murder for hire, going to prison for 22 years.

To put all this drama into perspective, what has been mentioned above is a fraction of side stories, character and dramatic events that occur throughout the series. There are multiple characters, zoos, cults and events I have left out because you can't contain the craziness of this series in one article.

The success of the series can be attributed to the timing of the launch, with a lot of downtime due to lockdown from Covet-19, and viewers looking for a distraction from the real-life drama. The series creators did an excellent job of anchoring the story in believability, by passing out dramatic milestones throughout the timeline and building characters we connect with before presenting the conflicts they have to navigate.

The series is a documentary but produced like a drama, leaving the audience deeply invested in the characters (the real people) and their storylines. A smart move from the producers to avoid the cringe effect and viewers writing off the series as propaganda.

A key difference is that the storyline is crafted from real-life events and not the imagination of a writer. This leaves the audience feeling slightly conflicted about the madness that occurs on screen, knowing full well that these events happened in real life, this ultimately leads people to binge hours of the series because you simply need to know what happens to everyone right to the end.

The complexity of the big cat community allows for the superimposed drama, fuelled by America's love for big cats and the profit that love can rack in. The industry and antics will definitely continue.

Eric Goode, also leaves a lot of questions unanswered, leaving plotlines with no conclusion, leading to art imitating life, because real life is unfinished and incomplete. Like everyone else, I'm left with a lot of questions, for example, is Don Lewis missing person's case reopened? what the hell happened to Bhagavan Antle cat lady cult? how is Jeff Lowe not in prison and how the hell did he attract two beautiful women when the man looks like a bikey version of Gandoff the Grey? But the one question that has been burning in my mind is where does this leave the big cats?

Are they any better off because of the Netflix hype, or was the case of exotic animal exploitation the medium to the true drama we wanted to consume? We should not glorify a man who was clearly an animal abuser and watching this series kinda feels like I have. It made me question where we draw the line between entertainment and reality. I believe the treatment of the animals in the series and continued abuse of animals in roadside zoos is deplorable, but am I any better than the families that attend the zoos and put money directly into the abuser's pockets? I watched the series, discussed it with friends, and hell I'm writing an article about its brilliance, so am I contributing to the issues?

Peta has, of course, put together facts about what was left out from the series, and clearly, there is a much deeper social issue here. I hope that the Netflix hype and mass internet interest will improve the plight of these beautiful animals. I think that we can all equally agree on is that this was a one sided docudrama and the Tiger King phenomenon has done nothing for the conservation of endangered wild tigers, that is a fact.